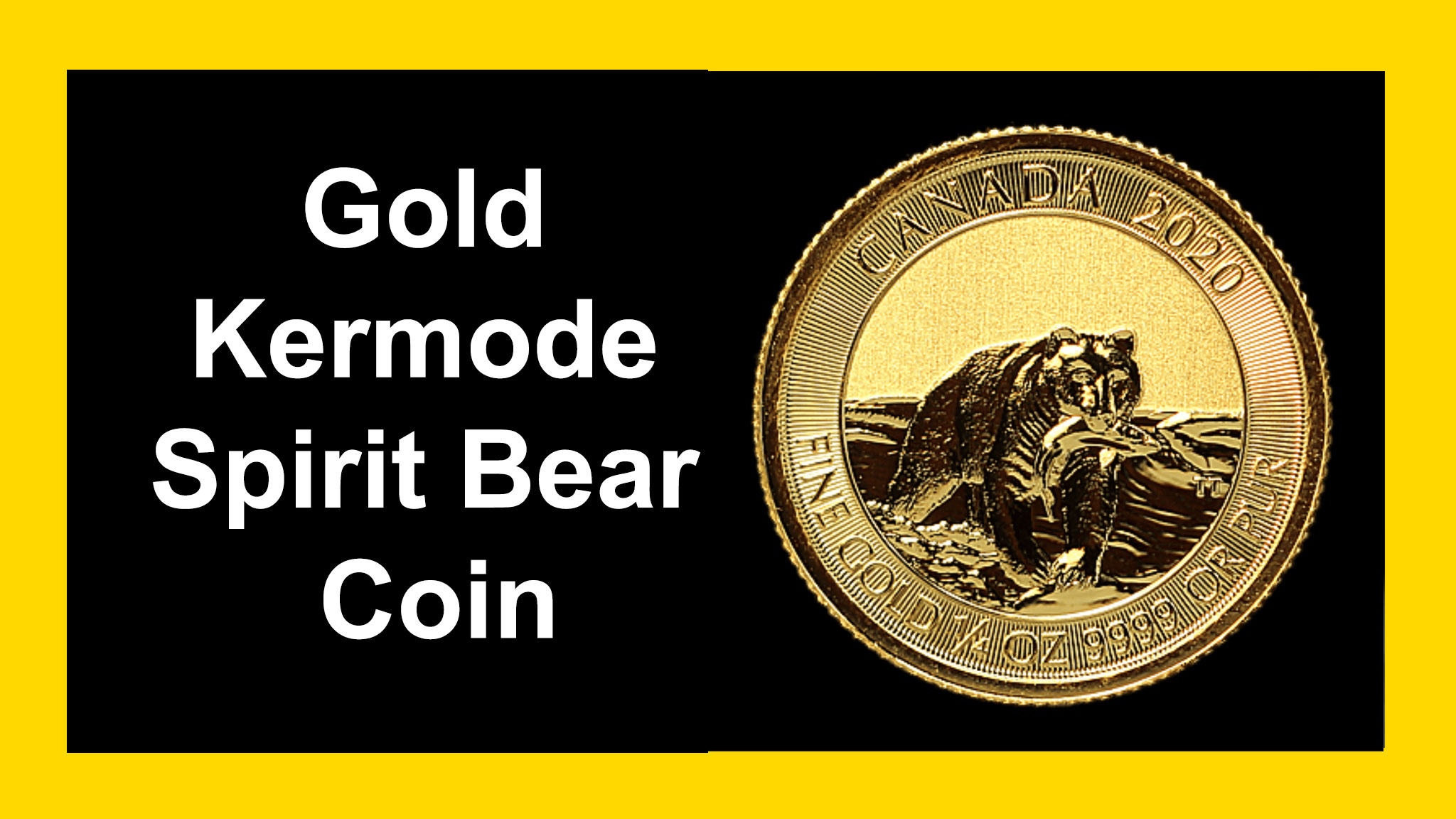 Kermode or ghost bear is a rare color morph of a black bear with a distinct white coloration that has inspired the name Spirit or Ghost Bear. Roughly ten percent of this bear species are white. But they do not have albinism because their paws, lips, nose, and eyes are dark.

Kermode bears have white fur due to regressive genes from their parents. Several studies suggest that white-furred black bear catches more fish since it has light-colored fur, which is less visible against the blue sky.

Invest Your Retirement Money In A Gold IRA Not Just Coins – Get A Free Investors Kit Here!

Gold Kermode Spirit Bear Coin, What Is It?

The Canadian Kermode Spirit Bear coin undoubtedly reflects beauty. The coin features a Kermode bear catching fish in the water. It brings attention to a bear specie that is only found in North American wilderness as well as the remote coastal forests in British Columbia

Spirit bears are famous for their white fur. If both bears carry MCR1, a special gene responsible for the white coloring, it is possible to give birth to a white bear.

This gold coin was designed to honor this uniquely powerful bear species.

Many gold coin collectors and investors were mesmerized by the beauty of the Gold Kermode Spirit Bear coins. The Royal Canadian Mint has issued this gold coin that features one of North America’s most admired yet elusive bear species, the Spirit Bear.

The coin design is beautiful, with front-facing depicting the face of the bear. The white-furred bear’s dark nose, as well as its mouth, brown eyes, and dense fur, have dimensional detail with the use of different engraving and shading techniques. With the black pupils and amber-toned enamel irises, the eyes of the white Kermodes make a greater impact.

If you have not yet seen these beautiful gold coins, here are the design specifics:

The bear’s face dominates the coin’s entire reverse field. Besides the light-colored fur, the bear has intense eyes that take the coin’s center stage. This gives the observers the vibe that the bear tends to stare directly at them.

The gold coin’s reverse design showcases a Kermode Spirit Bear catching fish with its mouth. This bear is walking in the water with a fish caught out of the water. The design is centered on the coin’s reverse, surrounded by a circular border.

In the upper portion of the gold coin’s borders, the word reads “Canada” with the issue year. The border’s bottom part displays the purity level and weight: FINE GOLD ¼ OZ .9999 PURE.

Susana Blunt was the designer of the coin’s obverse side. She won a contest created by the Royal Canadian Mint. This contest was meant to develop the queen’s portrait for use in the Canadian currency.

In the portrait, it shows the queen wearing a pearling necklace. In the design, the queen is not wearing a crown. Since 2013, the image designed by Blunt has been used on the country’s currency.

The design shows the words “ELIZABETH II D.G. REGINA,” which means “Elizabeth II, by the grace of God.” The Queen is written on the coin’s two sides around the profile. Then, the coin’s bottom part reads 10 DOLLARS, equivalent to the $10 Canadian dollar face value.

The current gold spot price affects the overall value of the gold coin. On the other hand, the coin only weighs .25 oz, and its spot price is based on 1 oz of gold. Anyone who estimates the gold coin’s value should keep this in mind.

The gold coins can also be worth slightly more than the gold’s value. Since the coin comes with an intriguing and attractive design with rarity potential, some of them can have a higher-than-spot price.

Meanwhile, it is recommended to contact precious metal dealers when determining the Gold Kermode Spirit’s current value since the price of gold fluctuates. This way, interested buyers can get the latest pricing information on bullion products based on international platinum, silver, and gold market prices.

Is it possible to add Gold Kermode Spirit Bear Coin to a Gold IRA?

The answer is YES. This is because the Gold Kermode Spirit Bear coin meets the IRA’s eligibility requirements. The IRA regulations require a gold coin to be at least 99.5% pure. And the Kermode Spirit gold coin comes with a 99.99% purity rare. In other words, the coin can be added to a precious metal IRA as it has surpassed the minimum requirements.

Other Gold Coin Reviews You Should Read

I’ve written reviews on many gold coins over the years. This list below is a rundown of other coins you should know about. It’s important to read them before making a decision to invest your money.