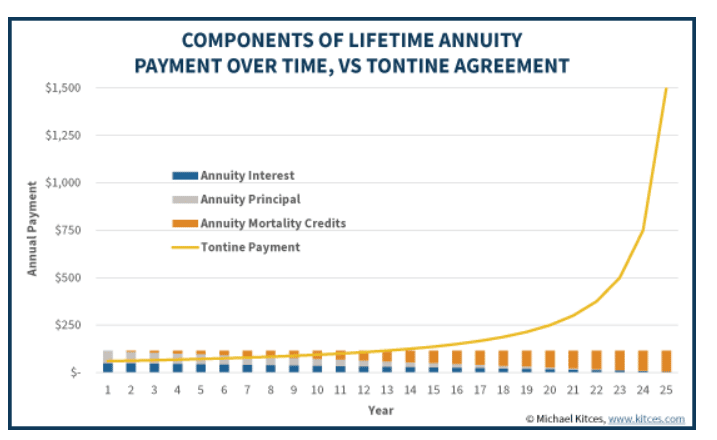 An early system for raising money, a tontine is something where people pay into a pool of funds that essentially will pay them dividends in relation to their ownership share of returns from various items that the pool invested in.  Whenever someone in the pool passed away, their stake was not replaced with another member, and accordingly the proceeds of the pool ended up being shared by fewer parties.  If this sounds like the television series “Survivor,” to you, you aren’t wrong!

Imagine a system where you profit off of someone’s death!  In most cases people would get into tontines with people they knew, which makes the whole scenario even more eery.  Even when tontines were abundant, they were widely regarded as a morbid investment vehicle.

What to Know About Tontines

These were popular way back in the 1700’s, but ended up going by the wayside in the early 1900’s, according to Investopedia.  My renewed interest in sharing this information with you is due to reading a story that talked about them perhaps resurfacing in society.  (More on that later in this article.)

They renewed interest is being sparked by a way to generate retirement income, and as a retirement blogger, I felt it was worth sharing this topic just in case it does become mainstream, as morbid as that sounds.  (Can you imagine the instagram influencer crowd hyping these? BLEH.)

Investors in tontines join together and pay a lump sum investment which offers them an annual payment (like a dividend) until they pass away.  Again, the morbid part is that when someone does pass away, the shares paid to the remaining members increases.

How Did Tontines Start?

This craze was started by an Italian financier named Lorenzo de Tonti, who went on to pitch the French government a financial tontine scheme as a way for the King at the time, (King Louis XIV) to generate capital.  Stories are abundant that point to this being the starting point of tontines, so we can credit Italy for the idea.  While it didn’t get a lot of fanfare right away, it eventually became a financing mechanism in royal courts in Europe.  Monarchs began to borrow money from tontines as a way to fund their wars.  It was stated in the same investopedia article that at one point, tontines were accounting for over 60% of the insurance market in the US and over 7% of the nation’s wealth.  If that’s not shocking enough, there were over nine million tontines in 1905 with only 18 million households in the country!

This takes me to the reason for today’s article.  I read on Dividend.com an argument for tontines as a way to battle inflation vs. annuities.  The below chart, along with the article, suggest that tontines should be re-examined by financial advisors as a way to provide returns.

It’s hard to argue that tontines could make somewhat of a comeback.  I almost cringe as I write this, as long time readers know my #1 retirement tip is to open a gold IRA and use an allocation of your retirement savings to sock away into precious metals.  However, if it does come back, you can’t ignore that it will be a financial instrument that many people will examine closely.

Would you invest in a tontine?